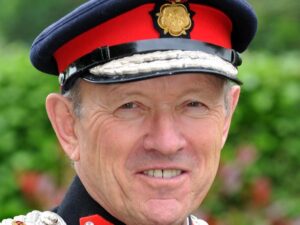 We would like to wish Sir Henry Aubrey-Fletcher Bt KCVO a Happy and relaxing 75th Birthday today!

As the official day of his retirement, we thank him for his hard work supporting charities in his role as our Lord Lieutenant of Buckinghamshire. It has been a pleasure to work with him and thank him for his support for the past 15years.

The Trustees extends their gratitude to Sir Henry for your hard work supporting many charities in Buckinghamshire over the years.  Everyone at SV2G are thankful to have had his support for the past 15years during your role as as the Lord Lieutenant of Buckinghamshire. We all sincerely wish Sir Henry a peaceful retirement with devoted wife, Bobbie.