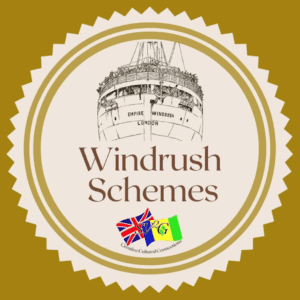 SV2G – St. Vincent & the Grenadines 2nd Generation is one of 14 charities and grassroots organisations across the UK that has received a share of the £500,000 grant from the National Windrush Community Fund.

Buckinghamshire Archives is proud to be supporting SV2G, the High Wycombe St Vincentian community, and wider Commonwealth diaspora who have made Buckinghamshire their home. The Archives hold a wide variety of records, which may prove useful to those eligible for the Windrush Compensation Scheme, if they are living Buckinghamshire or have lived here in the past. The event opened by showcasing a Windrush Scheme information film that SV2G had produced with Kate Jackman former BBC Producer for the project highlighting the support and funds available.

Throughout the evening presentations were delivered by Shakila Bukhari from the Home Office Windrush Lessons Learned Programme Team; Community and Stakeholder Engagement Hub, Katherine Gwyn Community Outreach and Projects Archivist at Buckinghamshire Archives along with Deiana Stapleton recently elected Chair for the National Council for St Vincent & the Grenadines Associations UK. A question and answer sessions took place in between performances by Calypsonian Alexander ‘D’ great and Wycombe Steel Orchestra.

A pre-recorded message from The Countess Howe, Her Majesty’s Lord Lieutenant of Buckinghamshire was played. Her message was one of encouragement and support to members in the community to come forward for help with their claims.

Over 18years SV2G has been raising awareness of their Caribbean Culture with their signature approach to engaging with communities in Buckinghamshire. Through sharing information about the Windrush Scheme, we will showcase our stories of our heritage and culture. Many Diaspora organisations like SV2G have increasingly become visible players on the global stage from awareness of culture, heritage, peace building, and advocacy to humanitarian assistance. The Windrush Scheme is a significant project for SV2G, and that are honoured to be able to support Vincentian Nationals, the wider Caribbean community and the Diaspora”
Jacqueline Roberts, FRSA – Co founder & Chief Executive Officer.

SV2G are now assisting people in the community and wider diaspora by raising awareness of the support available through the Windrush Schemes.

The Home Office has confirmed that as at the end of April: