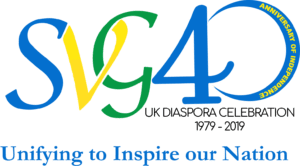 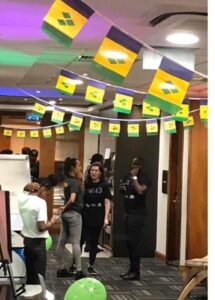 Saturday 30th November marked the inaugural SVG Expo UK as part of the UK Diaspora’s celebration of St. Vincent and the Grenadines’ 40th Anniversary of Independence this year at the Holiday Inn Hotel, High Wycombe. St. Vincent and the Grenadines celebrated its 40th Anniversary of its Independence on 27th October 2019, with many events and activities across the UK. The 30th November was specifically chosen as a later date from the actual date of Independence to accommodate the many celebrations being attended by our Nationals in the UK Diaspora. The SVG Expo was led by the partnership of SV2G, Vincy Alliance Mas and the National Council of St. Vincent & the Grenadines Associations UK. The expo was sponsored and supported by Kestrel Liner Agencies, a global logistics company. 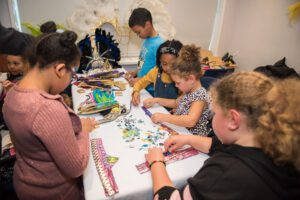 A selection of works from other exhibitions included on display were from Nadia Huggins – ‘Circa No Future’, SV2G – ‘Coming Back Home, Migration project and current project on Vincentian George Alexander Gratton, the first known Vincentian to live in the UK in 1809. Nationals and friends were also treated to the Vincentian services and products on offer along with opportunities to participate in steelpan taster sessions with the School of Steelpans and Wycombe Steel Orchestra as well as carnival mas workshops led by Vincy Alliance Mas.

The event was attended by the High Commissioner – His Excellency Cenio Lewis, The Lord Lieutenant Sir Henry Aubrey Fletcher, Chairman’s from the district and county councils, the Mayor of High Wycombe and representatives from sponsors Kestrel Liner Agencies.

Andy Thorne, CEO of Kestrel Liner Agencies said  “We are delighted to have sponsored the inaugural SVG Expo UK. Kestrel has specialised in shipping from across the world into the Caribbean since our doors opened; we are very proud to have a local office in St Vincent run by Marlon Gibson and an ever expanding team of local Vincentians.  The growth of the St Vincent and the Grenadines economy is dear to our hearts, as is supporting the Vincy population both here in the UK and back home in the Caribbean. Having spent my life living between the Caribbean and the UK , I understand how reliant the Caribbean is on bringing cargo in from overseas and how much it affects day to day business and life, hence our motto – Global Reach with Local Focus.”